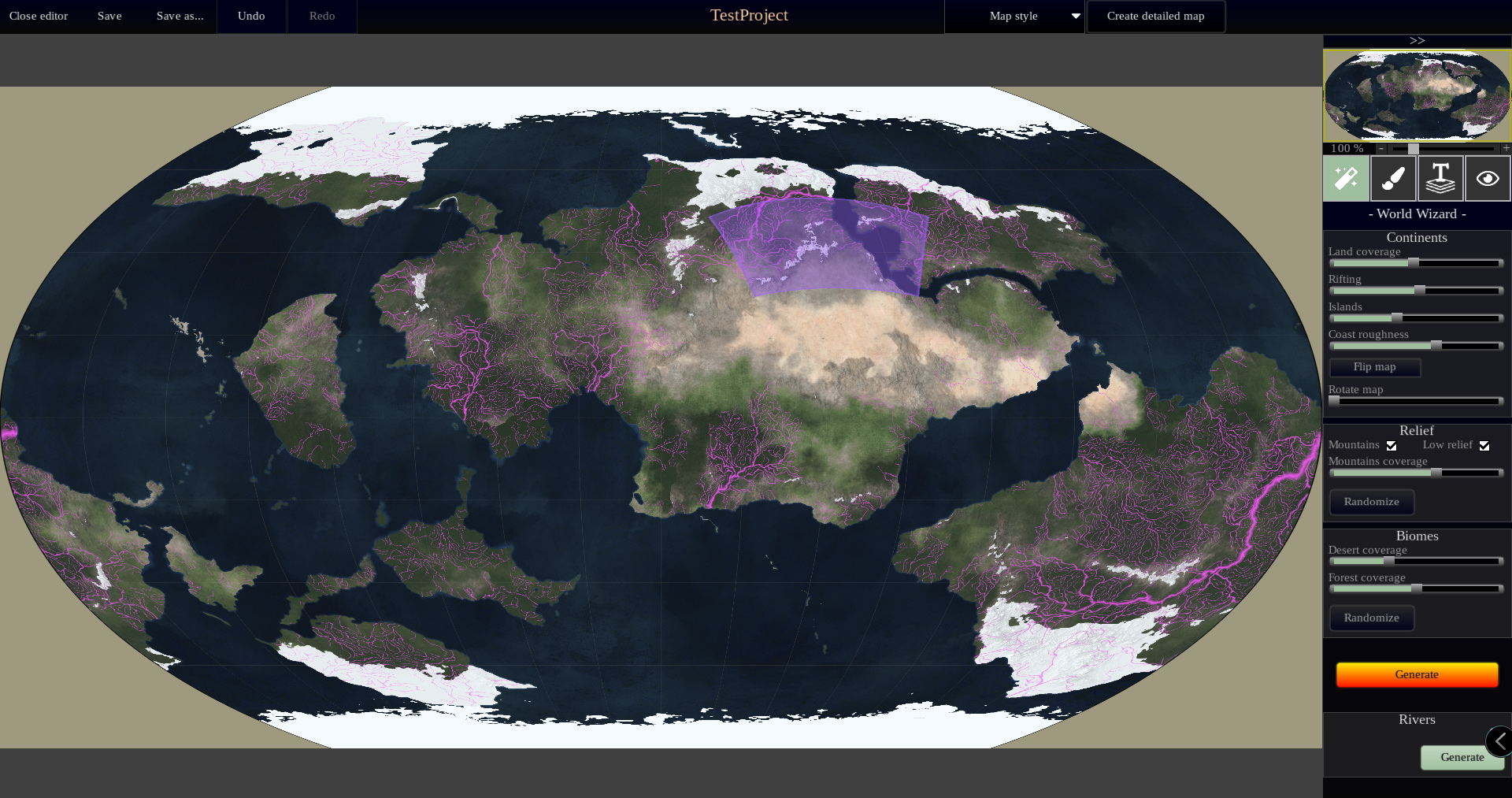 This post is about giving a good overview of:

Allright… First entry into the devlog, strap yourselves in! 😉

Orb Crafter – a novel yet experimental take on map-making

When it comes to map making, especially fantasy map making, for tabletop games, well, most of you already know about the wealth of solutions and tools that are readily available, whether they be free or paid, online tools or standalone software. Upon closer inspection though, most of these tools do focus on stylized mapping. This means maps that look like they come either out of Sir Tolkien’s imagination (as if hand drawn), either from a Blizzard video game (with playful, saturated colors and all that jazz). And that’s fine. After all the graphic content of, eg., Pathfinder, is a good example of what TTRPG players are accustomed to.

I don’t have a problem with that, and as a matter of fact, if you put these tools in the right hands, beautiful outcome result most of the time. No, the only caveat imo, is that I like my RPG sessions to rely on a realistic touch of low-to-dark fantasy… So, with that respect, the good question consequently would be: where’s the mapping software that’ll let me portray that ? I’m not sure… I did a quick search, couldn’t find it. And then, the following idea slowly diffused into my brain: “let’s make it happen then”…

And so here I went. I started drafting ideas for this now coming piece of software called Orb Crafter. The initial impulse (making realistic maps) evolved into ambitious stuff like seamless/coherent edit from world maps down to local baronies with proper geometric handling of spherical globes… I like that. It’s not an easy task. But, hey, what ‘s the use of holding a PhD with a specialty in computer graphics and geometric modeling of natural sceneries, and at the same time being a long time TTRPG player – if not to endeavor to develop such a tool? You get my point… 😉

First things first, let’s talk about the multimedia engine that runs the show. Instead of choosing say Qt5, I preferred, again, to roll my own. In fact, most of the grunt work has already been done on Cargo…

The Cargo engine is a personal C++ game engine that I started developing during my thesis (for a pending personal video game project), and that I decided to put to use with Orb Crafter. This heavy piece of code relies for now on OpenGL4 when it comes to talking to the GPU – so, yes, I guess this means no MacOS support if you need compute shaders (but more on that later) – and comes with a nice looking GUI stack (user input, events, text, widgets, layout, etc.). This is my main criteria: I needed something that I could work with damn fast whilst maintaing a highly customizable look n feel. Hence the Cargo decision.

It’s not a perfect solution. There are still some features lacking right now that I’ll need to implement, and some that need revisiting and/or hardening. But it’s fine, I much prefer having full control over the engine, hence the resulting product, than relying on third-party pre-wired stuff (even if more trustworthy production-wise, granted).

So. Mid february this year (2021) I started to code for Orb Crafter. About six months later, here is a rough list of what’s been implemented. Be aware, “implemented” does not mean feature completion, rather things have been tested and seem to work as-is. Most of these aspects need polishing, while a few need complete rehauling.

Allright, these are great achievements in themselves. Most of the proof of concept has been tested and validated (spherical world to flat local mapping, realistic views, etc.).

Now, there are quite a number of things remaining before I can call it done. For starters, all previous work only concerns the Windows 10 platform. The Linux port hasn’t been touched yet. My guess is I will first release on Windows and then see what comes out before porting to Linux.

Now, we’re getting there.

Only, there is one caveat, money… I can only provide 1 month of fulltime dev with my own funds as of august 2021. I will need to find a way to fund the completion of the project. For now, I’m thinking of a Kickstarter crowdfunding campaign to help along… Probably due October 2021, but I’m pretty short on time. I haven’t made any public advertisement for Orb Crafter until now with this devlog and website.

No comments to show.